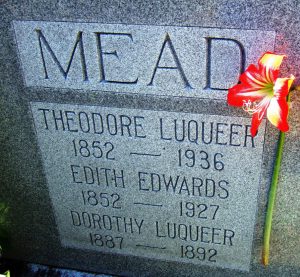 Founded in 1880, the 82 acre Greenwood Cemetery is the final resting place for some of Orlando’s most prominent families. Greenwood, once aptly named the Orlando Cemetery, is the city’s first and oldest cemetery, so it makes sense that the site would be home to a number of ghostly apparitions. Before Greenwood was established, Orlando had no formal burial grounds, nor proper record-keeping for the dead, leading to countless lost graves. Despite its haunted reputation, Greenwood is also known for its scenic beauty, with old tombstones juxtaposed against trees covered in spanish moss, a hallmark of natural southern scenery. The cemetery is also right next door to the Greenwood Urban Wetlands, which is chock full of large cypress trees and native Florida wildlife.

Who rests at the haunted Greenwood Cemetery?

Not all the souls buried at Greenwood are enjoying their eternal slumber. Greenwood is well-known for being haunted, as visitors often report seeing lingering ghosts, as well as hearing melodies, laughter, and even distinct smells if you stand in the right spot. So who are the infamous ghosts of the Greenwood Cemetery?

The Ghost of Fred Weeks

Fred Weeks was a businessman from up north, who decided to buy land near the Greenwood Cemetery as an investment. After arriving in the area, he realized that the land was a worthless swamp. Having been ripped off by the three English attorneys who had sold him the land, he attempted to get his money back, but to no avail. Seeking revenge, Weeks then bought another plot of land at the entrance of the Greenwood Cemetery, and erected a tombstone inscribed with the men’s names. The tombstone was also inscribed with a biblical verse from Luke 10:30, “A certain man went down from Jerusalem to Jericho and fell among thieves,” clearly directed at the men and their thieving ways. The placement at the front of the cemetery was obvious, he wanted everyone visiting Greenwood to be aware of their dubious character. The three Englishmen promptly bought the land back, and removed the tombstone.

Fred never let go of the incident. Around 1910, Mr. Weeks then bought another piece of land in the cemetery, about 100 feet away from the original tombstone. Mr. Weeks built his mausoleum on this land, and once again, inscribed the verse from Luke 10:30. Under the verse is a small square, large enough to fit the names of three men. Some say the names were chiseled off by the families of the men, others say that Weeks had been threatened with lawsuits and was forced to remove the names. No one knows for sure, but we do know that this is the final resting place for Fred Weeks. The controversy took its toll. Weeks died alone; his wife took the children and left. Upon her death, she was then buried in Indiana. A sad ending for Mr. Weeks, indeed.

It is said that Fred Weeks never let go of the scam, even in death. Many still see the ghost of Fred Weeks, usually standing in front of the mausoleum, or not too far from it. It could be that the scam still has Fred turning in his grave. Maybe it’s his wife that keeps his soul from getting proper rest. Either way, the legacy of Fred Weeks is not entirely bad, as someone always seems to leave flowers at the door of the mausoleum, indicating that someone out there still has a soft spot for ol’ Fred.

An especially creepy section of the Greenwood cemetery is known as Babyland, and it’s exactly what it sounds like. Babyland is the final resting place for children under the age of five. Many of these children died in the infamous Sunland hospital, once a place for patients of tuberculosis, and later a behavioral center for mentally challenged youth, which we’ll talk about in more detail further below. Many of these children were still infants, and a disturbingly high percentage of them had died on the same day they were born. Their tombstones often don’t have a name and only have one date, the day of their birth and death.

Many visitors to the cemetery report hauntings in and around Babyland, most notably around Babyland 1 and 3. Visitors report hearing the sound of children laughing and playing or the melodies of a child’s music box. Some even say that they’ll feel strange sensations, like a tug on their pants, similar to the way a child would try to gain the attention of an adult.

Just over 10 miles away, Sunland Hospital was originally a place for patients of tuberculosis, but during the 60’s it became a behavioral center for mentally handicapped and disabled children. Due to horrific allegations of abuse and neglect, it was shut down sometime in the 1980s. Many of the children who passed here ended up buried at Babyland.

Sunland, now abandoned, is itself a haunted location, and one of the most infamous in Central Florida. Visitors and urban explorers have heard the disembodied screams of children, seen ghosts in the playground, and have witnessed shadows of hanging bodies, presumably victims of suicide. Being that many of Sunland’s patients were buried at Greenwood, the connection between the two make for a creepy concoction of ghost stories.

The Wilmott family was an influential family in the Orlando area at the turn of the 19th century. They mostly dealt in real estate, and to this day, there are neighborhoods in Orlando named after the Wilmotts. Their mausoleum is positioned on the highest point of the Greenwood Cemetery and is the only other mausoleum beside the Week’s mausoleum.

Despite being a well-to-do family, the Wilmotts weren’t without tragedy. The Wilmott family lost their grandson, Fred Wilmott Jr, and a family friend, Frank Pounds Jr when they both drowned at a swimming hole. Both children were only five years old and had misjudged the depth of the water, leading to them wading in too deep. Freddy Jr and his family all rest their souls at the mausoleum.

There are reports of a ghost appearing at the Wilmott mausoleum, usually at the entrance. Visitors usually report seeing the same thing; a male figure in old fashioned military uniform, looking off into the distance, who then disappears a short while afterwards. No word on whether this soldier is related to the Wilmotts or not.

Being that the Greenwood Cemetery is Orlando’s first real burial site, many of the area’s most influential people are buried here. The graves of business people, politicians, historical figures, and media moguls can all be found at Greenwood. Many of the city’s mayors are buried here as well. Edna Giles Fuller, the first woman to serve in the Florida legislature, also rests at Greenwood. Among other big names buried at Greenwood are baseball hall of famer Joe Tinker, as well as Francis W. Eppes, a former Tallahassee mayor who helped found Florida State University.

July Perry and the Race Riots

Greenwood holds the grave of Julius “July” Perry, who was lynched in the act of racial unrest. Ocoee, a town near Orlando, was the site of one of the worst incidents of racial violence in recent history, the Ocoee Massacre. On Election Day, 1920, Mose Norman, a prosperous African American farmer, attempted to vote but was turned away twice, along with other members of Ocoee’s Black community. A white mob chased Norman to the home of July Perry, who drove away from the mob when he shot and killed two of the men in front of his home. The mob called for reinforcements and began torching churches, businesses, and other establishments in the Black community. About 30-35 African Americans were killed in the ensuing violence. July Perry was murdered and publicly lynched as a message to scare Ocoee’s African American community. Afterward, hundreds of Blacks, including Norman, fled Ocoee, essentially making it an all-white town. Many went to nearby Apopka and Winter Gardens, home to higher populations of Blacks. Along with July Perry, other victims of lynchings in and around Orlando are buried at Greenwood.

Greenwood is home to the graves of Orlando area veterans who fought in many wars past. The cemetery contains a military section, which is the final resting place for veterans of World War I & II, the Spanish-American War, the Korean War, and the Vietnam War. The entrance to the military cemetery, which is right across from Babyland, has a photo of Marilyn Monroe nailed to a tree, meant as a humorous tribute for the soldiers.

After the Pulse nightclub shooting in 2016, which targeted the LGBTQ community, the city of Orlando offered free plots to the victims of the shooting. Four victims have been buried there, though the city also left space for other victims, as well as their families. The city of Orlando also erected a memorial at the Greenwood Cemetery, which is composed of 7 stones each with seven names to commemorate the 49 victims of the massacre.

Greenwood Cemetery, along with other sites like the Sunland Hospital and the Robinson House, help create the surprisingly haunted history of Orlando. Read about other sites like Ma Barker’s House, home to the ghost of Ma Barker, or click here to read about the top ten haunted spots in Orlando.