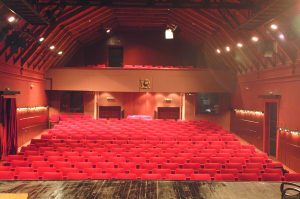 Located in Maitland, about 15 minutes north of downtown Orlando, the Enzian Theatre is a popular place for Orlando area movie buffs to catch a foreign flick or independent film screening. The Enzian Theatre is Central Florida’s only non-profit alternative movie theatre and the home of the Florida Film Festival. A beautiful scene, the Enzian is surrounded by weeping oak trees and has a large beautiful courtyard with a bubbling fountain. The venue is touted as one of the most laid back and relaxing venues for a major film festival in the US. Despite its ordinarily cheerful atmosphere and charming appearance, the Enzian Theatre is not without its ghostly hauntings. The Enzian Theatre and its adjacent restaurant, Nicole St. Pierre, are often haunted by a headless ghost, a recurring spirit that only appears on certain nights of the month.

History of the Enzian Theatre

The Enzian Theatre was founded in 1985 by the Tiedtke family, an influential family from Ohio that had established itself in Central Florida. The early days of the Enzian Theatre were not too different from today, being founded as a repertory house that played around six to twelve classic films a week. They also showcased various artists and musicians from time to time, with legendary composer Phillip Glass being among the most well-known musicians on Enzian’s lineup.

In 1989, the Enzian Theatre transitioned to become a more art-house film venue. They decided to take on more risks by playing first-time independent films. The idea was a hit. Despite Orlando’s usually family-friendly and mainstream appeal, area patrons flocked to the theatre to watch one of a kind indie films, and the Enzian Theatre became a trendsetting venue known not only in Central Florida but across the country.

Since 1985, the Enzian Theatre has hosted over two million people and shown over seven thousand films, and today entertains over 100,000 patrons annually. The Enzian has become a gathering place for the multicultural Central Florida film community, bringing together fans, filmmakers, and critics. The theatre also hosts film festivals from the different ethnic groups in Central Florida. In addition to showing films, the theatre also hosts seminars on education, film literacy, and movie history. Due to the theatre’s popularity, different venues had to be added, with two extra screens, to accommodate the growing number of patrons.

The influential Tiedtke family founded the Enzian Theatre. The Tiedtke family built their wealth in Toledo, Ohio, during the first half of the 20th century, by running a successful grocery chain called Tiedtke’s. The grocery store opened in Toledo in 1894, and by the 1930s, Tiedtke’s was a Toledo area staple. Tiedtke’s was akin to a community center, going beyond being just a local grocer; they became one of the first megastore groceries, rivaling today’s Walmarts. They gained customer loyalty with outstanding customer service and gave discounts and donations to those in need. Although they had long sold the business to another family in the 1920s, the store retained the Tiedtke’s name. Tiedtke’s experienced a decline in the 1960s, as urban decay and white flight set into the core of downtown Toledo.

The Tiedtke family spent much of their time in Central Florida, especially after selling their grocery chain. John Tiedtke, who would eventually help found the Enzian Theatre, made his home in the Orlando area. John invested in farming, buying up land for sugarcane farms during the Great Depression. The land was cheap, and John became a leading farming magnate who owned acres of sugarcane, citrus, and cattle farms. He ended up on the Palm Beach Agricultural Advisory Committee and patented a sugarcane loading and chopping machine. Tiedtke was also an economics professor at Rollins College, where he also became the Treasurer and Dean of Graduate Programs, and then spent 20 years on its Board of Directors.

As John Tiedtke got older, he took up philanthropy and became a champion of the fine arts. He helped found and revitalize numerous art clubs, societies, and venues in Central Florida. He helped save Orlando’s Bach Festival, the Florida Symphony Orchestra, the Orlando Museum of Art, the Orlando Opera, and the Festival of Orchestras, and also helped found the United Arts of Central Florida, in addition to helping found the Enzian Theatre and the associated Florida Film Festival. John was always surrounded by the arts; his father kept a huge pipe organ at their home. His best friend growing up, Hugh Mckean, was also the President of Rollins College and helped found the Morse Museum of Arts in Winter Park. Like Tiedtke, McKean was well known as a huge advocate of the arts in Central Florida. John Tiedtke’s wife, Sylvia Southard, was born in Vienna, Austria, known for being home to many classical composers. Southard herself was a fan of classical music. Today, John Tiedtke’s children, Phillip and Tina Tiedtke, and Phillip’s wife Sigrid, help keep the Enzian Theatre relevant in an area bustling with tourist attractions. John Tiedtke and his wife Sylvia both passed away in December of 2004.

The Florida Film Festival at the Enzian

The Enzian Theatre has a recurring ghost, who only appears on special occasions. The disembodied head of a woman appears in the main theatre room, starting at the north corner of the theatre, then floats around the room, screaming at the top of her lungs. The head then disappears into the adjacent restaurant, Nicole St. Pierre, and continues to terrorize the guests in the same manner. The disembodied head only presents itself on moonless nights at around 1:00 AM.

Not much is known about the ghost or why she appears when she does. It is said that the spirit is attached to the theatre because of her love for the building. Apparently, she inhabited the building long before it became the Enzian Theatre. Maybe she’s angered by the new tenants, and longs for an era that has since come to an end. Either way, late-night moviegoers are continually haunted by the woman’s blood-curdling screams.

The Enzian Theatre is a unique part of Central Florida’s culture and history, but there’s so much more to see! The Orlando area is home to several other historical haunted locations, like the infamous Greenwood Cemetery, home to Babyland, a spooky children’s graveyard. The former home of prohibition-era gangster Ma Barker is not too far off either, and her ghost still lives on. Or hang out in the abandoned Sunland Hospital, which once housed the mentally ill, many of which were buried at the nearby Greenland Cemetery. Though it’s known as a fun, family-friendly town, Orlando’s also full of creepy and otherworldly horrors, many of which remain unknown to the average joe. Read about Orlando’s top ten haunted spots here.