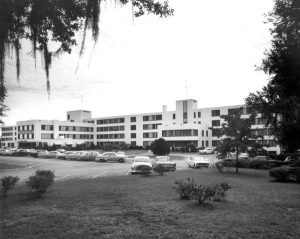 About eight miles west of downtown Orlando lies the ruins of Sunland Mental Hospital. Sunland was a chain of hospitals across Florida, known initially as the W.T. Edwards Tuberculosis Hospitals. The Florida government opened them in the 1950s to isolate and care for patients with tuberculosis. In the 1960s, tuberculosis became less of a public health issue as antibiotics strong enough to tackle the disease were developed, making the hospitals unneeded. The state converted them into mental institutions, and they were renamed the Sunland Training Centers. While the Sunland Hospital facilities were located throughout Florida, the Orlando location was especially notorious. Sunland Orlando was known for its horrid conditions and maltreatment of the patients, even escalating to outright physical abuse and torture. Around 1980, the horrible conditions became known to the public, and the Sunland Hospital was closed and left to decay. The building then became a mecca for ghost hunters. Visitors heard screams and saw shadows, many of which seemed to originate from children. In 1997, a man plunged to death in an elevator shaft while exploring the abandoned hospital with his friends. This led the Pine Hills community locals to petition to demolish Sunland once and for all. The main building was demolished in 1999, leaving behind only the administration building, which still attracts visitors looking for ghosts. The former site of the actual Sunland Hospital is now a children’s playground, and the spirits of children who were patients at Sunland still haunt the playground at night.

In 1952, the State of Florida’s Board of Tuberculosis opened a series of hospitals called the W.T. Edwards Tuberculosis Hospitals. The hospitals were considered to be state-of-the-art when they were built. At the time, it was thought that fresh air was the best way to treat tuberculosis, so they fitted the patients’ rooms with huge windows. All of the hospitals were constructed the same way; long, thin, and five stories tall.

By 1960, antibiotics effective against tuberculosis were developed, and the patient load at the W.T. Edwards Hospital was decreasing. The Florida Department of Health took over the operations of the hospital, and it was transitioned into a mental ward to care for children with physical and mental disabilities, thus beginning a dark new phase for the facility.

Sunland Hospital, more formally known as the Sunland Training Center for Retarded Children, was a hospital for adults and children who were severely mentally and physically disabled. The hospitals were opened around 1961, and in their twenty-year existence, the hospitals’ conditions gradually degraded due to being understaffed and a lack of funding.

The conditions fell into squalor. Rodents and pests bit both residents and staff, and roaches were everywhere. One patient with cerebral palsy stated she sometimes woke up to rats in her bed. One even walked onto her chest. The food was inadequately prepared. Over 400 patients were fitted with gastric feeding tubes, through which they were fed a cereal-like gruel three times a day. Rooms were crowded; up to 100 patients were kept in a single ward. Sanitation practices were unhygienic at best, and even surgical areas weren’t appropriately sanitized. The patients were bathed on hard concrete slabs, and their bodies made a loud ‘thunk’ as they were turned over. Sunland was hell, both for the patients and the staff. Many of the workers were shocked upon seeing the conditions in the hospital, but at the time, there wasn’t much they could do. One staff member even said that she couldn’t sleep for two weeks after starting her job at Sunland, as the patients’ abuse left her traumatized.

It was eventually revealed that there was a severe proliferation of “deformities” in many Sunland’s patients. These deformities consisted of respiratory infections, skin diseases, urinary tract infections, and nutritional deficiencies. The facility was understaffed and underpaid, contributing to the suffering of the patients. The excuse for the poorly run operations of Sunland Hospital was the simple lack of funds.

Despite the many problems at Sunland, the hospital tried to make things somewhat pleasant for the staff. Sunland had swimming pools, hopscotch, and shuffleboard. Small-time celebrities made appearances now and then, including one by the state governor. Many of the more functional patients were even honorary members of the Boys and Girls Scouts, receiving uniforms and posing for pictures in ceremonies with Scoutmasters.

By the 1970s, the horrific conditions at the Sunland Hospital became public knowledge. Concerned staff had voiced their concerns. In 1978, the Association of Retarded Citizens (ARC) filed a class-action lawsuit for gross neglect and abuse on behalf of the patients, or better yet, Sunland Hospital’s victims. They forced the hospital to close, which they did in 1983, ending an era of torture and abuse at the Florida state government’s hands.

The now-defunct Sunland Hospital was abandoned and fell into disrepair. It became a hangout spot for kids and urban explorers looking for a scare. Visitors often heard screams and moans, some of them from children. They saw the shadows of former patients, including the shadow of someone hanging from the ceiling. Apparitions of young children have also been seen wandering around.

In 1997, a 23-year-old man was playing hide-and-seek while exploring the buildings with his friends. While hanging out in the building, he fell into an elevator shaft and plunged to his death. Strangely enough, while en route to rescue the dying man, a sheriff’s deputy called in, having seen a young boy looking out of one of the second story windows. While searching the building, no boy had been found.

After the accident, residents and community members of the surrounding neighborhood lobbied to destroy the building, citing safety concerns. The building was finally demolished in 1998, leaving only the old administration building.

The Haunted Playground and Administration Building

A playground and a large field are all that’s left where Sunland Hospital once stood. Though it’s been years since the closure of the mental ward, many residents still remember Sunland’s horrors, especially those who worked there.

The innocent-looking playground hardly has any reminders of the tragedies that once took place here. Though, at night, ghosts of the children come out to play. Nighttime visitors have seen ghostly apparitions of children near the area, and swings have been seen moving on their own.

The only part of Sunland Hospital that escaped demolition was the administration building. Still abandoned, visitors see many of the same sightings as the main Sunland building, albeit in a smaller space.

The Greenwood Cemetery, another well-known haunted spot in Orlando, is also known for ghost sightings. At Babyland specifically, visitors have heard children laughing and playing, and some feel tugging on their pants, like a child trying to get their attention.

Orlando is known for family-friendly fun and its many tourist attractions, but the city also has a rich and haunted history. Many of Orlando’s most prominent historical figures were buried at the Greenwood Cemetery, the oldest cemetery in the city, and is a great spot to go ghost hunting. Ma Barker was a prohibition-era gangster who ransacked and kidnapped wealthy businessmen with her four sons. Her ghost still haunts her cottage in Ocala, FL. The Enzian Theatre is Central Florida’s only independent art-house venue. A great place to catch independent movies, it’s also home to a screaming headless ghost. You can also read about the top ten haunted spots in Orlando here.