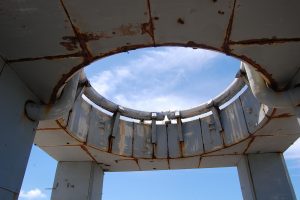 It was the height of the Space Race, and the US and Soviet Union were locked in a tense standoff to be the first nation to land on the Moon. Of course, it wasn’t really about space, but it was to see who could build the biggest rockets! Everybody knows that! The American launch point was from the sunny beaches of Florida, where the pristine weather allowed for a smooth liftoff into outer space. Cape Canaveral was, and still is, synonymous with spaceflight. But at the Kennedy Space Center, there sits a stark reminder of NASA’s failures. Launch Complex 34 was the launchpad that kicked the infamous Apollo program off the ground, literally. It was also where the pilots of Apollo 1 tragically lost their lives when their spacecraft exploded during their launch rehearsal. The disaster shocked the nation, reminding the general public just how dangerous spaceflight really is. After the failure of Apollo 1, NASA used LC 34 to launch Apollo 7 before shutting down for good. The launchpad is still there today, the eerie concrete structure serving as a monument to the lives lost. But LC 34 doesn’t just look creepy, it’s haunted too! Visitors who take a trip to the abandoned site have reporting feelings of deep dread upon arrival, as well as having vivid flashbacks to the accident. They claim to feel intense heat, see flames bursting around them, and worst of all, hear the bloodcurdling screams of the pilots in their final moments. At one point, NASA even had to cease allowing visitors to LC 34 due to “strange and unexplained occurrences.”  And what were those “occurrences?” NASA didn’t go into detail, but we can only imagine that it had something to do with the spooky hauntings at the old launchpad.

Launch Complex 34: To the Moon!

By the late 1950s, the Space Race wasn’t just about getting to space. NASA had a goal to land a manned mission on the Moon, but they needed bigger rockets. The previous mission, Project Gemini, was using Air Force Titan II missiles to launch spacecraft into orbit. For the adventurous Apollo program, NASA was planning on using the Saturn family of rockets, made for launching heavy payloads high into the sky. They were also going to need a larger launchpad to accommodate the bigger rockets, so they got to work on building Launch Complexes 34.

Construction on LC 34 began in 1959, and was completed a year later. In 1961, NASA launched its first test of a Saturn rocket from the newly built launch complex, and over the next two years, three more test rockets were successfully launched from LC 34. In 1966, NASA finally began preparing for its big mission to the Moon by launching the unmanned Apollo spacecraft as a payload with the Saturn rockets. The two test launches were a success, and AS-204, now known as Apollo 1, kicked into high gear.

AS-204 was going to be the first manned mission of the Apollo program, the end goal of which was to successfully land a manned spacecraft on the Moon. Apollo 1 was simply going to be a test. The engineers as NASA wanted to put the manned Apollo command and service module into orbit. The launch was scheduled for February of 1967. In January, the pilots geared up for what they thought was going to be a launch rehearsal. Little did they know that Apollo 1 wouldn’t ever make it off the ground.

On January 27th, 1967, pilots Gus Grissom, Ed White, and Roger B. Chaffee rode the Astrovan out to the launch site. This particular rehearsal was to test if the Apollo spacecraft could correctly operate using its own internal power. The test was considered non-hazardous, as there was no fuel or cryogenics aboard the spacecraft, and the pyrotechnics had been disabled. The engineers were confident and didn’t plan for any serious emergencies, which proved to be a fatal mistake. After the first successful run, faulty wiring caused an electric spark that ignited the highly oxygenated air in the craft. It took about five seconds for the flames to overwhelm the cabin. The door was sealed shut, trapping the pilots inside. There was no way for rescue crews to get in. The fire eventually burned a hole through the cabin and burst through the exterior of the craft. They died almost instantly, and their spacesuits and oxygen tubes were found partially melted. According to the autopsy, the pilots died from asphyxiation after being exposed to the toxic pressurized air. The third-degree burns that covered their bodies happened after their deaths. It was a gruesome end indeed.

The Apollo disaster left a dark aura over NASA. Public perception shifted. It was later revealed that one of the contractors for the Apollo program was knowingly doing subpar work. The manned tests of the Apollo mission were halted as investigations and Senate hearings were held. Before the fire, Apollo 1 was referred to as AS-204, and the name Apollo 1 was to be reserved for the first successful manned launch of the Apollo spacecraft. At the request of the families of the late astronauts, the mission was renamed Apollo 1.

The next manned mission, Apollo 7, was the last to take off from Launch Complex 34. The crew trained for 21 months, and rigorous testing and inspections were done of the Apollo spacecraft and its equipment. The crew actually monitored the construction of the spacecraft in person. Though Apollo 7 was a success, tensions between the crew and ground control were high, mainly due to the fear of another disaster.

Launch Complex 34 was decommissioned in 1969, a few months after Apollo 7. The structures were mothballed and scrapped in 1972. All that’s left today are the concrete launchpad, two flame shields, and the blockhouse. On the launchpad are two plaques that pay homage to the tragedy of Apollo 1 and the astronauts who lost their lives. There are also three granite benches with the names of the astronauts, as well as a blue astronaut memorial kiosk.

LC 34 is a weird place. The decaying concrete launchpad towers over an empty grass and cement field like a monolith. It doesn’t look like the site of a disaster, but everyone who visits knows what took place. The darkness of that day still hangs over the abandoned structure. Many say that the ghosts of the three pilots still haunt the area.

Visitors report feelings of overwhelming sadness, fear, and even a terrible sense of doom. They describe it as if the world was coming to an end. Others report having vivid memories of the disaster, as if they had experienced it themselves, despite it occurring over 50 years ago. The most common occurrences are loud, painful cries of agony echoing from the launch site. The isolation of the area means there are no obvious sources for the sound to be coming from. Some claim to see the flames bursting through the Apollo spacecraft, and even feel the heat of the fire as an overwhelming burning sensation engulfs their body.

Those who visit Launch Complex 34 relive the lives of the astronauts in their last moments. NASA had to halt visitors to the launchpad due to “strange and unexplained occurrences.” We don’t know what that means exactly, but we can only guess. Maybe the ghosts of the astronauts came back to give the Apollo 1 flight another shot. Perhaps the spirits began to haunt NASA personnel too. We will never know the truth.

Learn more about the haunted history of Central Florida!

From the theme parks and attractions to the sunny beaches, Central Florida is a tourist’s paradise. But the state has a haunted history as well. Check out the Cassadaga Spiritualist Camp, often called the Psychic Center of the World. The town’s cemetery is home to the infamous Devil’s Chair, where visitors can have a seat and speak to the Devil himself. Swing by the abandoned ruins of Sunland Hospital. Once a tuberculosis hospital, Sunland later became a facility to house mentally disabled children. They were kept in horribly unsanitary conditions and were fed cereal-based sludge through tubes in their stomach. Those who died in Sunland Hospital were probably buried at the nearby Greenwood Cemetery. An entire section of the graveyard, called Babyland, was reserved just for children. Those who walk through Babyland claim to hear the sound of children giggling, and occasionally feel one of the children tug on their pants. Before making a visit to Orlando, you should read up on the top ten most haunted spots in Orlando right here!