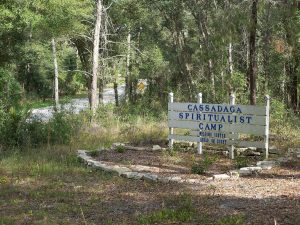 Just 35 miles north of Orlando lies the small, mysterious town of Lake Helen. A tiny town with a population of only 3,000, Lake Helen is known for its abundance of psychic mediums and haunted houses, which lie mostly in the southern portion of the town, commonly known as Cassadaga. The Cassadaga Spiritualist Camp, founded in 1895 by Spiritualist George Colby, has cemented the town as a mecca of Spiritualism and psychic mediumship. The town is often referred to as the “Psychic Center of the World.” Lake Helen is also home to the haunted Cassadaga Cemetery, which is most famous for the Devil’s Chair, a large stone chair that is said to summon the Devil himself when visitors take a seat. Due to the sizable psychic community and abundance of haunted locations, Lake Helen and Cassadaga have earned the reputation as the most haunted city in Florida.

In the mid-1800s, spirit medium George P. Colby began traveling around the country, giving spirit readings and conducting seances. Colby made a living this way and had earned a reputation, often being called the “Seer of Spiritualism.” Colby was originally from a town called Pike, in New York State. He often attended Spiritualist Camp meetings near the town of Cassadaga, New York, which would eventually lend its name to the community in Florida.

In 1875, while at a seance in Ohio, Colby was spiritually contacted by a Native American spirit called Seneca. Seneca claimed to be Colby’s spirit guide and told Colby that he was destined to travel to Florida and create the world’s greatest Spiritualist camp.

Colby began his journey to Florida, making friends with other mediums along the way, like TD Giddings, who would help found the camp. Seneca continued to give Colby guidance, instructing him to find “the high pine hills overlooking silvery lakes.” Colby ended up near the small settlement of Blue Springs, Florida. He found a 35-acre plot of land, which sat upon seven forested hills not far from Lake Helen. Colby and the Giddings family would then sign the deed for the land and created homesteads on what was just backwoods at the time.

In 1933, George P. Colby passed away and was buried at the nearby Cassadaga Cemetery.

The Southern Cassadaga Spiritualist Camp was founded in 1875 by George Colby. His reputation and the healing properties of the nearby lake brought other spiritualists and psychic mediums to move in and have a place to practice their Spiritualist mash-up of religion, science, and philosophy. The camp began as a winter retreat for northern Spiritualists to practice as they escaped the cold climate, but eventually the camp became a permanent settlement. Though Colby originally acquired 35 acres of land, which were deeded to the founders, it wasn’t long before the camp expanded to its current size of 57 acres, attracting Spiritualists and mediums from around the country and the world.

Being in the Deep South, Christianity was still a strong force in the area. Local pastors and preachers spread rumors about the Spiritualist Camp. Rumors about devil-worshipping, arcane rituals, witchcraft, and paganism swirled through the Christian community. Others said they dumped the bodies of the dead in nearby lakes and engaged in human sacrifice. Church leaders urged their congregants to stay away, setting a stigma that lasts to this day. Some Spiritualists that go to Cassadaga keep their activities secret for fear of reprisal.

The town of Cassadaga has flourished into a thriving Spiritualist community known for mediums, psychics, and spiritual healing rituals, as well as tarot card and palm readers. The town has a population of 4,000 people, and many of which reside in the Spiritualist Camp. Many residents offer healing and spiritual services from inside their homes, and you can find New Age shops and bookstores all over town.

Cassadaga is said to sit on a vortex, which is a point of concentrated physic energy. The vortex is natural, but other vortices in the area are man-made, created by the psychic activity that the town is known for. Other vortices exist at sites like Stonehenge and the Pyramids at Giza.

The architecture in Cassadaga has remained mostly unchanged since it was first settled in the 1800s, leading the community to be added to the National Register of Historic Places in 1991.

The Cassadaga Cemetery is the home of the infamous Devil’s Chair, a large, red bench made of brick. There are numerous legends associated with the Devil’s Chair. Many say that the Devil himself speaks to you when you sit in the chair, and some report hearing voices in their head when seated. Others say the Devil outright appears to those who sit in the chair. The best-known legend of the Devil’s Chair is that if one leaves a can of unopened beer on the bench, one can find it empty the next morning but still unopened.

The real story of the Devil’s Chair goes back to the 1920s. The chair was built for a man who unexpectedly lost his wife and spent lots of time at the cemetery visiting her grave. Over the years, his arthritis got the best of him, and constantly walking to the gravesite took a toll on his body. He built the chair so he could have a seat after taking the long walk to visit his wife’s grave. There are quite a few similar benches in the Cassadaga Cemetery, but the Devil’s Chair is the most well-known.

The cemetery attracts many nearby ghost hunters and teenagers looking for a thrill, many of whom vandalize the cemetery and graves, especially on Halloween. The cemetery has a nighttime security guard posted on Halloween to keep intruders away, and some of the mediums and psychics from Cassadaga are known to block the road to the cemetery on Halloween under the pretext that they are “in contact with the dead.”

Visitors to the Cassadaga Cemetery have also seen dark shadows lurking among the trees and ghosts and spirits wandering around the premises.

The Cassadaga Hotel is the only hotel in Cassadaga, though there are a few in Lake Helen. The original hotel caught fire in 1926 and was rebuilt two years later. The Cassadaga Hotel is famous for its roaring twenties style interior and Mediterranean architecture. Though the hotel is not an official part of the camp, it’s known for psychic activity, as the upper floors contain the offices of psychics, mediums, and tarot card readers. The hotel restaurant is a popular meeting spot for the Spiritualist practitioners and residents of Cassadaga.

The Cassadaga Hotel is known to be haunted, and numerous spirits and ghosts reside there. The most well-known ghost is Arthur, a friendly Irishman who often hung out on the second floor. Arthur was known to place a seat at the hallway window on the second floor, where he could peacefully smoke a cigar and observe the outdoors. After passing away inside the Cassadaga Hotel in the 1930s, patrons and employees claim that his spirit still lives in the building, especially near his spot on the second floor. Many have claimed to feel a ghostly tap on the shoulder or catch a whiff of a cigar when walking down the hallway.

Guests of the Cassadaga Hotel have also seen ghosts roaming the hallways at night, as well as seeing floating orbs in some of the rooms. Some of these phenomena have been captured on film.

Though Orlando is known for its family-friendly atmosphere, the city also has a rich, haunted history. Learn more about the haunted locations around Central Florida, like Ma Barker’s House, home to the ghost of a Prohibition-era gangster. Or take a walk through the haunted greenwood cemetery, the oldest graveyard in Orlando. Or check out the abandoned Sunland Hospital, a tuberculosis hospital that later became a horrifying mental institution. You can also read about the top ten most haunted spots in Orlando here.