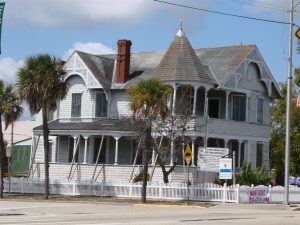 Located in Titusville, the Pritchard House is considered one of Florida’s creepiest haunted houses. The house is built in the Queen Anne style of architecture, giving it a spooky vibe. The house was once home to James Pritchard, a former captain in the Confederate Army. Pritchard lived at home with his wife, mother-in-law, and his two children. Pritchard’s children, Boud and Kate, then inherited the house after their father’s death, living in the house until 2005. The house was then purchased and restored by the Brevard County City Commission. Though the city government has repeatedly stated that the house is not haunted, many residents have said that they’ve witnessed evidence to the contrary. Ironically, the efforts of the museum staff at the Pritchard House to debunk any evidence of ghosts has led many ghost hunters to believe that they’re hiding something. Paranormal experts and curious enthusiasts alike often visit the house trying to spot a ghost. The spirit of “Miss Lovie,” Boud’s wife, has been seen looking through the windows at night, and James Pritchard and his wife Mary have been seen as well. Ms. Lovie in particular is known to be quite hostile to intruders, just as she was when she was alive. Others have heard disembodied voices and screams coming from the house. The grandfather clock in the house hasn’t worked for decades, yet it still sounds at midnight. It seems that, despite the restoration work done to make the Pritchard House look less accommodating to ghosts, the spirits of Ms. Lovie and the Pritchard family still feel at home.

Despite fighting for the Confederacy, James Pritchard was born a northerner. He was born in New York City in 1839, though the Pritchard family moved quite often. Right before the Civil War, Pritchard and his family were living in St. Louis. He enlisted in the Confederate Army when the war broke out and quickly rose to the rank of captain. Pritchard’s father fought on the other side of the Mason-Dixon line, having been a Colonel in the Union Army. After the war, James Pritchard met his wife, Mary Haley Boye, while visiting Galveston in 1866. Like Pritchard, Boye was from a well off family, and her wealth allowed Pritchard to build what would become the most haunted house in Florida.

In 1876, after living in both Texas and Missouri, the couple inherited some land in Indian River County from Mary’s grandfather and began growing sugarcane and citrus. In the 1880s, after a deep freeze killed most of his crops, Pritchard expanded his business ventures, getting involved in real estate and opening a hardware store. Pritchard’s real estate companies, Pritchard & May and West Coast Realty, were the first to operate in Central Florida. He expanded his businesses further when he began opening branches of his store in Miami. In 1889, Pritchard founded the Indian River State Bank and took the role of president. Again, the Indian River State Bank was the first bank in the region. The first light plant in Titusville was also sponsored by Pritchard, which eventually became part of Florida Power & Light, the dominant power company in the state today. Titusville became the first town south of St. Augustine to make the jump to electric lighting. Over the years, the Pritchard family prospered from the many endeavors that James was involved in, allowing him to buy a plot of land for his home near the ocean. He had his house built in 1891 and promptly moved his family in. Pritchard retired from the bank in 1925 and died a year later in 1926.

Pritchard contracted Pleasant J. Hall to have the house built in 1891. Pritchard bought the tract of land from Mary and Henry Titus, who founded the city of Titusville. James and his wife Mary, their two children, Mary’s mother, and their family maid, were the original residents of the house. Pritchard’s son, Boud, got married in 1913 to Lola Pauline Smith, also known as “Miss Lovie.” They lived in the Pritchard House, even after James Pritchard died in 1926. Bout and Lovie had children of their own, who then went on to get married and move their families into the house. The Pritchards resided in the house until it was purchased by Brevard County in 2005 for historic preservation purposes. In 2016, the county transferred the house to the City of Titusville.

Ghosts of the Pritchard House

Victorian Queen Anne style architecture is known for its spooky vibes, and the Pritchard House is known for being the scariest looking house on Washington Street. Despite the city’s restoration in 2005, the ghosts and poltergeists in the museum house haven’t left the building. Since many of the decorations in the house once belonged to the Pritchard family, it’s possible that the ghosts have become attached to the vintage artifacts which decorate the house, meaning the ghosts aren’t going anywhere as long as their stuff is still lying around.

The Pritchard Family never left home, as most of the Pritchard gang members have been seen in and around the home by passersby. Most notably, Miss Lovie, the wife of Boud. Miss Lovie was never a fan of guests walking into her home uninvited, so she haunts visitors and stands guard at the window at night. Joggers and tourists have seen a mysterious woman standing at some of the windows after dark. Some have even been able to take a few pictures. Many have said they’ve seen an attractive woman in a white dress staring through the windows, watching for guests. Others who’ve seen Miss Lovie say she seems zombified and decrepit, though she still wears the white dress.

The ghosts of Mr. and Mrs. Pritchard have both been seen inside the house as well, though not as often. Mr. Pritchard has been seen still in his Confederate uniform, lounging around the house. He, too, has been seen through the windows at night. Some guests have even seen his apparition while on a tour.

Others have had some unusual experiences while inside the house. Disembodied voices are a common occurrence. One guest has even heard a girl cry out for her mom, presumably one of the Pritchard household children. Lights often turn on and off by themselves. The grandfather clock is known to ping at midnight even though it hasn’t worked in ages. Many say that the unusual occurrences are Miss Lovie’s spirit attempting to drive out the museum staff and guests, who she considers to be intruding into her private home. Just as she was in life, Ms. Lovie was very much unwelcoming to strangers entering her abode. Strangely enough, the other ghosts in the house, including Mr. Pritchard, don’t seem to mind having guests around.

Florida is known for its sunny beaches and tourist attractions, but its history leaves behind a number of terrifying stories and haunted attractions. The swamps of Central Florida are especially haunted and hide some terrifying secrets. Read about the horrible atrocities at Sunland Hospital, a tuberculosis hospital that became a mental institution. You should also stop by Orlando’s Greenwood Cemetery, home to Orlando’s oldest ghosts, and the burial site for many of Sunland Hospital souls. Plan a visit to the Cassadaga Spiritualist Camp in Lake Helen, dubbed the “Psychic Center of the World”. You can also read about the top ten most haunted spots in Orlando right here!